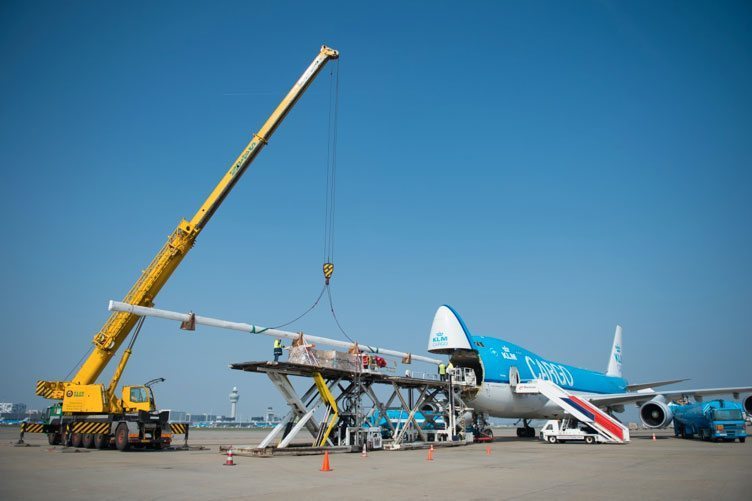 Transport of spare mast to Volvo Ocean Race in Brazil.

During leg 5 in the 2014-2015 Volvo Ocean Race, from Auckland (New Zealand) to Itajai (Brazil), the Dongfeng Race Team suffered bad fortune due to a broken mast. Dongfeng is a Chinese sponsored team, with Chinese and French crew, skippered by Frenchman Charles Caudrelier and run by a UK shore team.

They had been leading the race when they went into leg 5, which is considered the toughest as it takes the teams down in the Southern Ocean where they face extreme high winds, enormous waves and icebergs. The teams all survived the aftermath of tropical cyclone Pam. Not far from Cape Horn, Dongfeng broke their mast just above the 3rd spreaders. They pulled into Chile and have managed to stabilise the remainder of the mast and are now motor-sailing to Itajai.

Even though they had to retire from this leg and will take 8 points through, they are still in second place overall, so remain in a position to win the Volvo Ocean Race when finishing the last leg in Gothenburg (Sweden) in the end of June.

Martinair Cargo however has quit some experience as they handled similar transports during previous editions of the Volvo Ocean Race.

After arrival in Sao Paulo the 30 metre long mast will be trucked down to Itajai to the venue, which will take another 3-4 days and should arrive just before the in-port racing on 18th, and restart of leg 6 on Sunday April 19th.